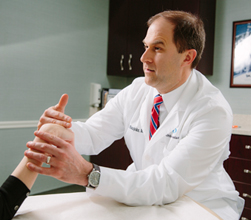 With surgical skill, patient-focused empathy, and a relentless devotion to accountability Dr. Naujoks, the seven-year OAM veteran, has cultivated quite a distinguished career and built a consummate reputation.

“I would recommend OAM and Dr. Naujoks to anyone, for any orthopedic issue or problem.”
– Megan Aubrey, Patient

There are three key values, consistently demonstrated by the specialists at Orthopedics Associates of Middletown, that have patients responding with the greatest appreciation for what has been done for them. Those values are surgical skill, patient-focused empathy, and a relentless devotion to accountability for the outcomes being sought.

Awarded his subspecialty certificate in surgery of the hand in 2016, Dr. Ryan Naujoks, a specialist in arthroscopic surgery for the hand, wrist, shoulder, and elbow, began his practice at OAM in 2010. Over that time there have been countless patients who have acknowledged that the seven-year OAM veteran demonstrates those three values, in addition to many others, and as a result, he has cultivated quite a distinguished career and built a consummate reputation.

Recently, a patient named Megan Aubrey was compelled to inform OAM just how much she credits those values for the exemplary experience she had under Dr. Naujoks’ care. Megan, who had fractured her wrist and elbow, needed two surgeries and had to have pins and plates inserted in her radius and humerus bones. She was taken to Middlesex Hospital, where Dr. Naujoks was on call. That initial visit, followed by diagnostic tests, the surgeries, and follow up visits to the Westbrook and Middletown offices, gave her the impetus she needed to share her story.

Even before she learned his name, Megan was clued in to the fact that she was in the best possible care when the staff at the Hospital told her of Dr. Naujoks’ reputation and proven expertise in hand and upper extremity trauma. Because of the extent of the necessary treatment, Megan was understandably very nervous, but the compassion and understanding shown by Dr. Naujoks each step of the way made her feel entirely at ease.

She was also impressed when OAM Physician Assistant Brian Beltrani made a special trip to the hospital to personally supervise an important CAT scan that required intricate positioning to optimize imagery and minimize pain.

“I would recommend OAM and Dr. Naujoks to anyone, for any orthopedic issue or problem,” she says. “In fact, I’ve already been referring friends to them, because their specialists are so professional and confident.” Such patient experiences are why OAM continues to grow as one of the most respected orthopedic centers of its kind in New England.

Dr. Naujoks, whose other specialties include carpal tunnel syndrome and all upper extremity arthritis conditions, is also a noted expert in Dupuytren’s Contracture, a progressive condition that affects a person’s ability to extend their fingers. In addition to surgery, when applicable he uses non-surgical methods such as collagenase treatments (enzyme injections) and needle aponeurotomy (tissue manipulation), both of which can be used to treat Dupuytren’s Contracture.

He earned his medical degree from the University of Connecticut School of Medicine, where he also completed his orthopedic surgical residency. Married, with three children, Dr. Naujoks has been recognized with several awards of excellence, has authored a number of noted papers in his field, and is a member of all the leading orthopedic medical societies in his lifelong home state of Connecticut.