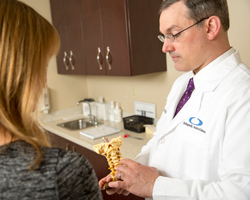 “My overriding goal is to establish complete trust and solid communication with each of my patients.” – Dr. Hicks. OAM is dedicated to successful diagnoses and outcomes for all its patients.

– Ed and Deb Calamari of Chester
Six and half years ago I had spinal fusion surgery on three discs in my lower back. The surgery was done at St. Raphael’s in New Haven because my surgeons at the time worked out of that hospital. I was out of work for three months after the surgery. They told me that eventually the next disc up would need to be fused.
About two years ago I began having excruciating pain once again in my back. I couldn’t go back to the surgeons who performed my first surgery because one of them had retired and the other one moved to Texas. I decided that if I needed to have surgery, which I was pretty sure I did, that I wanted to try to have it done at Middlesex Hospital because I live in Chester. Both my wife and I no longer wanted to drive to New Haven for appointments.
I couldn’t take the pain any longer! My wife started searching the internet in January, 2016 to find an orthopedic surgeon who specialized in spines who worked out of Middlesex Hospital. She came across Dr. Alfred Hicks. He joined Orthopedic Associates of Middletown in August, 2015. He had an unbelievable resume! We were impressed that he had served as a surgeon in Iraq and Afghanistan and also did a Fellowship at the Norton Leatherman Spine Institute in Louisville, KY.
We saw Dr. Hicks in March of 2016. He looked at all of my medical records regarding my previous surgery. He really listened when I told him what I was experiencing. Dr. Hicks made both me and my wife feel very comfortable. He showed me on his laptop the disc that was giving me all the problems. He told me what my options were. First I could try physical therapy; if that didn’t work I could try pain medication and then surgery if all else failed. He let it be my decision what course of action I chose.
I gave it another year of physical therapy and short-term pain medication. I ended up having spinal fusion for a second time on the next disc up from my previous fusion on March 15, 2017. Initially, the surgery was supposed to be about four and a half hours long. It ended up being six and a half hours long because Dr. Hicks had to remove all the hardware from the original fusion and replace it with new hardware so that it would match up to the hardware he was using to fix the disc that was bad. He also had a lot of chipping away of bone. When he was all done, he came out to tell my wife everything he did.
I have been walking at least a mile a day since a week and a half after the surgery! I haven’t been able to do that in years because of the pain. Many friends have commented to me that they have never seen me walk this good. Others didn’t know I was so tall. Still others thought I looked 20 years younger. At my two-week post op Dr. Hicks thought I was doing fantastic and said I could go back to work the following week! Of course, I can’t lift more than a gallon of milk yet but that will come in time. He said, “it’s like we did a 100,000 mile service check back there.” Both my wife and I really appreciated how he related to me in terms of my line of work.
He literally gave me my life back. I have been a diesel mechanic for 40 years; and to think that I can still “turn a wrench” thrills me to no end! Dr. Hicks is an amazing surgeon and a genuine person. He is a wonderful addition to Orthopedic Associates of Middletown!
Sincerely,
Ed and Deb Calamari of Chester